WITH its demure, buttoned-up front, long sleeves and full-length skirt, the black gown might be Victorian mourning dress, down to the jet beads. But then you notice the iridescent gleam under the skirt, and realise that those yards of starched black organdie are split to the waist; when the wearer steps forward, you’ll see flashes of the narrow, rainbow-sequinned pants beneath.

This is Meiling’s Black Moth, a dress inspired by her last collection, Creatures of the Night.

But this dress was designed specially for a very high-profile show held to mark the “soft” launch of the Commonwealth Fashion Council (CFC). It opened last night at Buckingham Palace under the patronage of the Duchess of Cambridge, wife of Prince William. Meiling flew out on Ash Wednesday to prepare for the show, and is due back from London tomorrow.

Told in November that she’d been chosen to represent the Caribbean in the exhibition, Meiling and her staff took perhaps three weeks to make the dress, but she began thinking about the design as soon as it was commissioned.

Almost severe at first glance, the dress gives up tiny secrets as you look more closely, and you can see why designing it took as long as actually cutting and sewing it. Meiling says although she’s not girly – no bows or frills for her – she likes romantic looks, as well as the clean, simple and minimal. This dress somehow combines all those elements. Care and craft have gone into it literally from top to bottom, from the double collar to the organdie flounce around the hem. The segments of the full skirt (there are seven yards of fabric in the dress) are cut on the bias, and joined with Meiling’s trademark faggoting (a technique in which sections of fabric are linked by an embroidery stitch, leaving a narrow gap between the two strips). The ten rows of glittering black beads joining the lengths of fabric at the back are echoed by the band of matching beads edging the cuffs.

The top half is austere – but only at the front, with a stand-up collar and six hand-knotted buttons. The back, though, is open down the centre, and though the dress is night-black, it’s made of semi-transparent fabric, subtle but sexy. So while the covered-up, 19th-century look may be traditional – unexpectedly so –the slit skirt and back, and the pants beneath, are very modern and surprising in their own way. 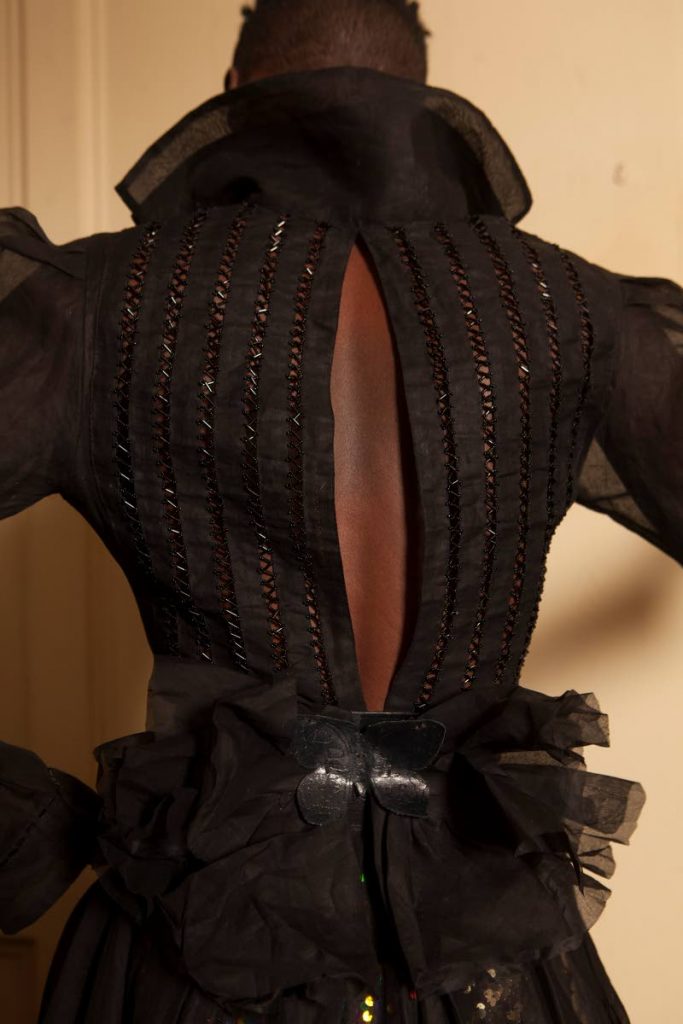 As for the details and the fabric, those are absolutely Meiling. She loves beading, she said in an interview for a 2007 book. Sometimes she still does it herself; her mother taught her, many years ago. “We do a lot of beading,” she said then. “That’s our signature, hand-embroidering and beading …we don’t want the clothes to look mass-produced.”

She likes fabrics with texture, and organdie is one of her favourites. It looks like voile, but is not only sheer but crisp, and Meiling enjoys “fabrics you can sculpt with…you can do origami with it, pleat it…” It’s cotton, too, another favourite: she considers it the perfect fabric for the tropics.

As for the colour of the Black Moth, she’s known for wearing only black herself, usually a casual top and pants (she’s hugely relieved she didn’t have to wear a frock or evening gloves to the exhibition opening at the palace). For her, “nothing is as sharp as black or white…black and white stands for line.”

Wrapped around the wasp waist of the dress is a belt of tooled black leather. There’s an additional touch at the back – an appliqued moth at the centre, embellished with moth-shaped organdie cut-outs. It’s fastened at the front with corset-style lacing. The belt isn’t by Meiling, but it harmonises perfectly with her work, with its delicious, rich but not overpowering detail: the glittering diamantés, the patterns on the moth’s wings. 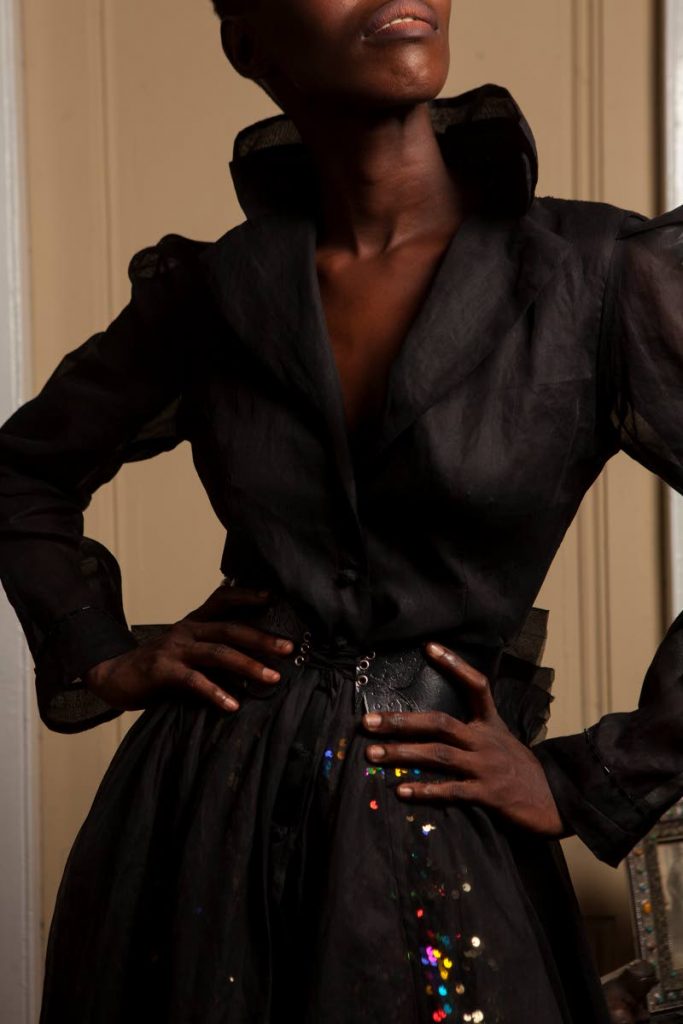 For the show, the Commonwealth Fashion Exchange, the council brought together designers and artisans from all 52 member countries, who were asked to work in pairs – so it will be a very exclusive show indeed, with only 26 exhibits in the show, each produced by a pair of designers.

Meiling was matched with a leather designer, Vanessa Winston, from Dominica. Winston had lost much of her workshop when Dominica was devastated by Hurricane Maria in September, but was able to produce the belt with the motif that gives the dress its name. The designers of the pieces on show will go to London for the exhibition – FashionTT is sponsoring Meiling’s airfare – and to her delight Winston is also being flown there.

The CFC intends the work being made for the show to “highlight traditional heritage, skills, craftsmanship and industry from across the Commonwealth, as well as innovation and technology.”

With its embroidery and beading, the leatherwork and bright but not overpowering sequins, Meiling’s Black Moth fulfils that commission in unexpected ways.

The other bodies backing the exhibition include the British Fashion Council and Fashion is GREAT, an organisation that celebrates British excellence. The exhibition coincides with London Fashion Week, which began on February 16 and ends on February 20. It also marks the start of the run-up to the Commonwealth Heads of Government Meeting being held in London in April. So after the original, private opening at the palace, the exhibition will be shown at a public venue until the Commonwealth heads’ meeting. It will then travel to different venues over the coming months and may even go as far as New York.

The aim of the CFC –Meiling is a member of the board – is to bring Commonwealth fashion industries together under one umbrella (its logo is shaped like an umbrella). It will develop programmes like the “100% Made in the Commonwealth” initiative, meant to link designers and manufacturers to produce designs and clothes “that reflect the values and principles of the Commonwealth Charter.” Its programmes and activities are therefore based on the pillars of sustainable development, trade, education and youth and gender empowerment. (The CFC hopes to have a “fashion conversation” in TT, among other places, in the near future.)

Meiling fits in perfectly with the council’s aims: she’s well known and indeed revered not only as a pioneer of local fashion and as one of the few designers with the business skills to have survived the economic ups and downs of the past few decades, but also for her generous mentoring of aspiring young designers.

Meiling was trained in London from 1964, returning home in 1967 and working in a factory as a pattern-maker and grader before opening her own little boutique. Nowadays she gets invited to take part in fashion weeks overseas, but she’s coming full circle in being invited to show a piece in this very special exhibition. And it’s fitting that it’s at a palace, too –because Meiling is Caribbean fashion royalty.